Joint study with OHCOW tests idea that having burnout can worsen work stress, but finds only supervisor support affected

Studies to date have repeatedly shown a link between psychosocial work stressors and negative mental health symptoms such as burnout. Though much harder to do, a growing number of studies has also shown the link to potentially be a causal one. That is, chronic exposure to stressors at work can lead to exhaustion and fatigue, both mental and physical.

But if work can cause burnout, might it also be the case that burnout can influence a person’s relationship to their work? Some researchers have suggested that a negative feedback loop exists between work and mental health—one that could make work even more stressful for workers who are already exposed to work conditions that are associated  burnout in the first place.

A study at the Institute for Work & Health (IWH) recently examined this question. Drawing on the results of two surveys on psychosocial work conditions conducted three years apart, the study found a potential cause-and-effect relationship—with work stressors affecting burnout, but not the other way around.

Second of a three-part series

With the increasing attention given to work-related psychological injuries in recent years, researchers in occupational health and safety have sought to understand the contribution of psychosocial work factors to work-related mental health conditions—i.e. factors such as job demands, job control and job insecurity. The study described here is one of three new studies conducted at the Institute for Work & Health that examine psychosocial work factors in worker health using data from the Canadian National Psychosocial Work Environment Survey. Read the first and the third articles of the series.

We found quite pronounced relationships for many of the work environment factors we examined, says Dr. Faraz Vahid Shahidi, lead author of a paper on the study, published in the October 2021 issue of Journal of Occupational and Environmental Medicine (doi: 10.1097/JOM.0000000000002396). Overall, a stressful work environment is a stronger driver of burnout than burnout is a driver of more stressful work. What that means is, to prevent this negative feedback between adverse working conditions and burnout, our interventions should focus on improving the psychosocial quality of work rather than on instructing workers to better manage their stress and burnout symptoms.

The study used results from the Canadian National Psychosocial Work Environment Survey (CNPWES), a population-based survey conducted by the Occupational Health Clinics of Ontario Workers (OHCOW) and administered twice, in 2016 and again in 2019. Participants were recruited from a panel of about 100,000 Canadians who agreed to take part in online surveys from time to time. People were eligible if they worked for an organization with five or more employees.

Out of the 2016 sample of about 3,600 respondents and the 2019 sample of 3,350 respondents, a subset of 453 participants took part in both surveys. The team focused on the results of this group for this study.

The surveys also included four questions from the Copenhagen Burnout Inventory to capture general feelings of exhaustion and fatigue. (Examples included: “How often have you felt worn out?” and “How often have you been emotionally exhausted?”) In their analysis, the team looked not just at burnout as an outcome of the six psychosocial work factors—but also at the six psychosocial work factors as an outcome of burnout.

The idea of burnout having an effect on work factors may be less intuitive than the opposite, but it is a recurring research question that needed to be tested in Canada, says Shahidi. Researchers have suggested several theories to explain how this relationship might occur. It may be that having poor mental health feeds into negative perceptions of the work environment. It may be that mental exhaustion makes it hard for someone to maintain positive relationships at work, resulting in a more stressful workplace. Another theory suggests workers with poor mental health may tend to opt out of career advancement altogether to avoid further harm to their health. Finally, some have suggested that workers with poor mental health are more likely to end up in lower quality jobs, hence more stressful environments, through a cycle of poor performance, leading to job loss, difficulties getting hired and ultimately, few or poor job options.

In its analysis, however, Shahidi’s team did not see burnout symptoms leading to worsening levels of job demands, job control, job insecurity, co-worker support or organizational justice three years later. What they did see was poorer supervisor support over time.

We didn’t test why, but we think this finding clues us into how supervisors and managers may perceive and respond to burnout, says Shahidi. This is just a hypothesis, but it’s not like someone has burnout and, because of that, ends up with more work on their plate, for example. What we think burnout can do is maybe tarnish a worker’s interactions with supervisors and managers, who may lay blame on the worker for being burned out. This can lead to unfair or discriminatory treatment by supervisors.

The finding that burnout largely doesn’t affect psychosocial work conditions points to the need to address the work environment—rather than focus on symptom management. I’m skeptical of the idea that, if we reduce people’s symptoms of burnout and poor mental health through meditation or wellness programs, we can improve how people perceive their job and reduce the stress they experience at work in the long term or sustainable way, says Shahidi. Instead, the evidence in this paper is a useful reminder that job stressors are the driving force behind burnout, and if we modify those aspects of the work environment, we may make headway towards reducing and even preventing burnout symptoms. 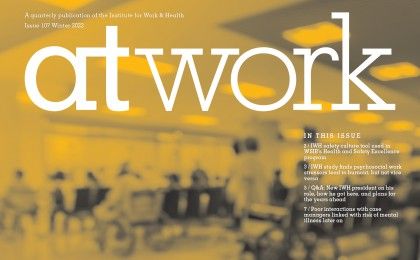