Given the many demonstrated benefits of work—especially on health, well-being and financial security—it’s troubling that persons with disabilities still face significant barriers to employment and productive careers.

Persons with disabilities face substantially lower employment levels—57 per cent compared to 75 per cent among the general working-age population. If working, they also earn considerably less than the Canadian average—$34,000 versus $40,000 in 2017.

To date, efforts to improve the labour-force participation and employment rates of persons with disabilities have focused on equipping individuals with the resources and skills to make them job-ready. Little attention has been given to building up the capacity of employers and workplaces to be better able to tap into the talent pool of persons with disabilities, which is sometimes described as “disability confidence.”

Now, a six-year initiative supported by the federal government’s New Frontiers in Research Fund (NFRF) Transformation Stream is being launched to flip conventional inclusion approaches on their heads. Called Inclusive Design for Employment Access (IDEA), the initiative is a social innovation laboratory that focuses on “skilling up” employers and workplaces to be better at recruiting, hiring, accommodating, training and promoting persons with disabilities.

Barriers to employment of persons with disabilities represent a significant waste of human capital for Canadian society at large, especially considering that one in five individuals in Canada identify as having a disability, says Dr. Emile Tompa, a senior scientist at the Institute for Work & Health (IWH), executive director of IDEA, and co-lead of the Workplace Systems hub within the initiative.

Our IDEA is focused on transforming workplaces and labour markets so that there is equality of opportunity in careers, jobs and work for persons with and without disabilities. And our approach is focused on building employer capacity to be disability confident.

For decades, researchers and practitioners have worked hard to help persons with disabilities get jobs, and numerous approaches have been studied. Yet, we have not been very successful at moving the dial on employment opportunities for persons with disabilities, says Dr. Rebecca Gewurtz, associate professor at McMaster University, director of IDEA, and co-lead of the Employment Support Systems hub. Skilling up workers, which is the approach that has been taken to date, only gets you so far.

A lot of work has gone into addressing the barriers that are individual and person-centred, says Dr. Mahadeo Sukhai, vice-president, research and international affairs and chief accessibility officer at the Canadian National Institute for the Blind, and co-lead of the Inclusive Environmental Design hub within IDEA. The real question is: how do we address systemic barriers, so that inclusion is built into the system from the get-go, and not just added as an afterthought?

Emerging technical systems and practices offer both new opportunities and ways of working, but they also create new risks and barriers to access, says Dr. Jutta Treviranus, professor at OCAD University and co-lead of the Disruptive Technologies and the Future of Work hub. Inclusive design requires consideration of the full range of human potential and particular attention needs to be given to people at the far ends of the distribution.

Focusing on skilling up workplaces is the logical next step, says IDEA’s engagement lead, Alec Farquhar, a senior policy specialist with an extensive career in the public sector, most recently as director of the Ontario Office of the Worker Adviser. When I think about capacity building, I think of a whole range of human resources engagement with persons with disabilities that an employer needs to be able to support—for example, advertising a job, recruiting, onboarding, training, accommodating a disability, mentoring and providing career support, dealing with crises when someone’s disabilities or health conditions flare up and dealing with the impact of aging. says Farquhar.

It’s across this range of interactions that employers may be uncertain about how to build up the capacity to address them, he adds.

Reflecting on his time as a manager, he adds, disability management was a constant challenge. And it was frustrating the way we were managing each case separately and not learning much from one case to the next. And the systems we had were not sufficient to allow us to be more strategic, more proactive and more inclusive.

Using a social innovation lab structure, the IDEA initiative is designed to enable teams of researchers and partner representatives to work in tandem and address multiple barriers to employment of persons with disabilities at the same time. (The five hubs, again, are: 1) Workplace Systems and Partnerships, 2) Employment Support Systems, 3) Transitions to Work and Career Development, 4) Inclusive Environmental Design, and 5) Disruptive Technologies and the Future of Work.)

The hubs will work in parallel with lots of overlap, in a coordinated and comprehensive manner, says Tompa. This social innovation lab structure allows us to simultaneously address the multitude of issues that need to be tackled in order for us to see progress and build more inclusive workplaces. The hubs were developed through extensive consultation with partners and collaborators over a two-year period. Each hub is co-led by a research co-applicant and a collaborator from the disability support/advocacy, labour, employer or policy stakeholder community.

We have an outstanding roster of partners representing disability communities, labour organizations, employers, service providers and policy-makers who are ready to make effective and evidence-informed change, says Gewurtz. They will help open doors for us in workplaces. They have passion, experience and networks that are ripe for this transformative initiative.

Projects undertaken in each hub will follow a five-step signature methodology, which includes: 1) rapid synthesis of existing knowledge and approaches, 2) stakeholder consultations and experience mapping, 3) rapid prototyping through co-design, 4) implementation and evaluation at the local level, and 5) scaling up local innovations with ongoing evaluation.

The methodology was designed for hubs to, as a start, identify innovative approaches through environmental scans and literature syntheses, then contextualize findings via stakeholder consultations. These first two steps comprise an approach being spearheaded by IWH, one that builds on our experience conducting evidence syntheses of peer-reviewed literature and working with stakeholders to contextualize findings, says Emma Irvin, director of research operations at IWH. With IDEA, we will use this methodology to build capacity in the research community to conduct knowledge syntheses, which we see is an important step in the knowledge-to-action process.

The third through fifth steps involve co-designing rapid prototypes through meetings involving interdisciplinary teams, then implementing and evaluating the prototypes. We will then roll these innovations out to workplaces across Canada through our linkages with industry, unions and major employer associations. That’s the big vision, notes Farquhar.

The involvement of persons with disabilities across the hubs and at all steps of project development is crucial to this initiative—in keeping with the principle, Nothing about us without us, says Sukhai.

The IDEA team has already invited persons with disabilities and employers to let the team know about initiatives that have worked well in certain contexts and can potentially be adopted by others. We hope stakeholders will take a critical look at what innovative employers have done and use the co-design method to develop and pilot initiatives at their own workplaces, says Farquhar.

Farquhar is optimistic about the initiative’s ability to attract stakeholders. Referring to a study by Tompa that estimated that the cost of excluding persons with disabilities from full participation in society amounted to $338 billion in calendar year 2017, or 17 per cent of the Canadian GDP, he adds: Every employer has a version of that number. For most stakeholders, it’s not hard to see the costs—both human and economic—of letting things stay the same.

Inclusive Design for Employment Access (IDEA) is a social innovation laboratory structured to enable teams to address multiple barriers to employment at the same time. The five hubs that make up IDEA are: 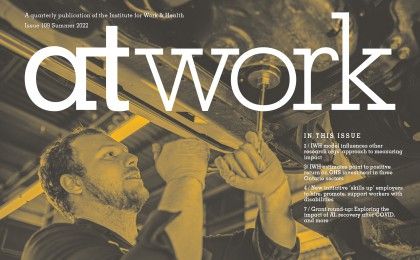