Even when workers experience occupational health and safety (OHS) vulnerability, the support of a supervisor who’s committed to health and safety can reduce their risk of injury. This is the finding of a recent study from the Institute for Work & Health (IWH) published November 2018 in Safety and Health at Work (doi:10.1016/j.shaw.2018.11.001).

People are vulnerable to OHS risks when they’re both exposed to hazards at work and protective factors such as OHS policies, awareness or empowerment are lacking. That’s according to previous research at IWH, which has also found that OHS vulnerability, conceived this way, is linked to a higher prevalence of self-reported injuries and illnesses.

Our findings suggest that, even in workplaces where workers experience OHS vulnerability, a supportive direct supervisor can reduce the risk of injuries, says Dr. Basak Yanar, lead author of the study. A supervisor committed to health and safety can protect workers who may not know about their rights, who lack the power to speak up, or have little recourse via organizational policies to lessen the risks they face.

The study offers a new analysis of results that were collected as part of a larger research project on an OHS vulnerability framework developed by IWH Senior Scientist Dr. Peter Smith. It involved a sample of 2,390 respondents in Ontario and B.C. who were older than 18 and worked at least 15 hours a week. They were asked to complete a 27-item survey—later named the OHS Vulnerability Measure—as well as two questions on supervisor support and two questions on work-related injuries or illnesses in the previous 12 months.

Read about the project

Developing a framework for understanding and measuring OHS vulnerability

The questions in the OHS Vulnerability Measure cover four dimensions: respondents’ exposure to nine common hazards, access to protective policies and procedures, awareness of OHS rights and responsibilities, and empowerment to act on these rights. From these four dimensions, respondents were considered vulnerable if they reported weekly exposure to two or more types of hazards (or weekly exposure to just one of the following: heavy lifting, bullying, working at heights and working with hazardous substances), as well as inadequate protection of any type.

A third of the sample was found to experience at least one type of OHS vulnerability, with vulnerability due to inadequate policies and practices being the most common. Nearly one in five (17.8 per cent) reported having a work-related injury or illness in the year prior, including 11.9 per cent who required time off or medical attention due to the injury or illness. Nine in 10 respondents said they worked for a supervisor who was aware of the hazards involved in their jobs, and 86 per cent said their supervisor was engaged and did everything reasonable to protect them from being injured at work. When respondents said their supervisor was both aware and engaged, they were defined as having supervisor support.

The study found that, across all three types of OHS vulnerability, injuries (the study treated both injuries and illnesses as a single category) were least prevalent among respondents who were not vulnerable and had supervisor safety support. They were most prevalent among respondents who were vulnerable and had no supervisor safety support.

As one would expect, the latest analysis found that, across all three types of OHS vulnerability, injuries and illnesses (grouped as a single category) were most prevalent among respondents who were vulnerable and had no supervisor safety support. Indeed, for these respondents, the risk of injury was at least 3.5 times higher than it was for those without OHS vulnerability and with supervisor support (once factors such as age, gender, contract type, workplace size and industry were taken into account).

This study reinforces research that has been done at IWH and elsewhere on the importance of a safety-conscious supervisor, says Yanar. She adds that focusing on training, assisting and expecting supervisors to provide safety support may be worthwhile.

Our findings suggest that building supervisors’ capacity may be an important component of an injury prevention plan, especially in workplaces where it can be difficult to reduce hazards or implement organization-wide policies, says Yanar.

This table shows the prevalence of injuries and illnesses across four groups of respondents, broken down by vulnerability status and supervisor support. 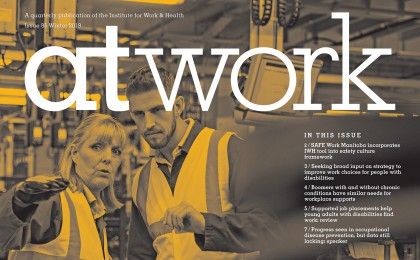