Violence and aggression toward workers is a significant hazard in the health-care sector. In Ontario, it’s one of the top five reasons for lost-time injuries among health-care workers. The issue, brought sharply into public attention with the 2005 workplace killing of a nurse in Windsor, Ont., has retained its high profile with the subsequent passage of two provincial bills in 2010 and 2016.

Despite the priority given to the topic, prevention efforts by health-care organizations still face certain challenges, according to a recent qualitative study by the Institute for Work & Health (IWH). The study, conducted in five hospitals representing the diversity of acute-care hospitals in Ontario, identifies several common challenges in the implementation of workplace violence prevention initiatives, as articulated by a cross-section of hospital front-line workers and managers.

We heard a willingness across the board to address this issue. Senior management in all the hospitals involved in the study considered this a priority, says Dr. Agnieszka Kosny, lead researcher of the study. However, these are large and complex organizations, and the reality on the ground can be quite different from what’s set out in prevention programs.

The resulting report, Implementing violence prevention legislation in hospitals, and a two-page summary are available on the project webpage.

Challenges on the ground

Since Bill 168 came into force in 2010, employers in Ontario have been required to: establish violence prevention policies that are reviewed annually; develop and maintain a program for controlling risks, summoning assistance, responding to and reporting incidents; assess risks of workplace violence; and train and educate employees. Bill 132, which took effect in September 2016 while the study was in progress, expanded the definition of workplace harassment and violence to include sexual harassment and violence; it also imposed new employer responsibilities around the reporting and investigation of complaints.

The study set out to examine the key factors that helped or hindered the implementation of violence prevention policies and practices designed to meet the requirements of the 2010 legislation. Interviews and focus groups were conducted with 157 people. They included front-line health or medical workers, front-line non-medical workers (for example, staff in food services and security), hospital managers in various roles, as well as external key informants such as policy-makers, training developers, and union and employer representatives.

Participants agreed that a “cultural shift” has resulted in decreased acceptability of violence in health care. They described the implementation of violence prevention programs and some of the challenges that still existed. The researchers grouped the observations under six broad themes.

Training: Training was an important part of each hospital’s violence prevention program. Hospitals provided training to all staff on a mandatory “core curriculum” including de-escalation, summoning assistance and reporting, often with more intensive training for staff in high-risk areas. However, a high overall training workload sometimes resulted in the expectation that staff would complete training on their own time. Also, a heavy reliance on online training meant some staff felt they had more difficulty retaining information and were not adequately prepared for real-life scenarios.

Flagging: Patient flagging was a contentious issue. Workers wanted information about previous aggressive behaviour, but some felt flagging could stigmatize patients and lead to differential treatment. A degree of “permanency” in the flagging process and a lack of gradation were also raised as issues. Workers reported some hesitation flagging patients when the violent act was perceived as unintentional or lacking malice. Information was not always well-communicated, particularly to non-clinical staff, and sometimes flagging did not result in clear clinical or behavioural plans.

Alarms: Hospitals had different ways of summoning assistance, including the use of duress badges, screamers (small devices that emit an extremely loud sound), intercoms, telephones and verbal communication. Most participants appreciated having access to personal alarms. They viewed this tangible investment by the hospital as a sign of commitment to violence prevention. However, concerns were raised about alarms that malfunctioned or had defects that weren’t discovered until the alarms were needed. Some workers reported confusion about what to do once everyone assembled in response to an alarm (such as during “code white” situations).

Security: Differences were reported between hospitals that had in-house security and those that worked with externally contracted security teams. In-house security teams were viewed more favourably by staff. They were seen as being well-trained and knowledgeable about the hospital’s policies and environment, in contrast with outsourced security teams, which were described as being poorly trained and inexperienced. Participants were also conflicted about the role of security in certain units (such as mental health). Regardless of who provided the services, violence prevention and incident response were viewed as more effective when the role of security was transparent and clearly communicated to all staff (e.g. who takes the lead when a “code white” is called). Training in violence prevention was described as a key component of effective security teams.

Reporting: At each site, management spoke about the importance of reporting as a driver of policy, programming and training. However, certain incidents were less likely to be reported. These included verbal aggression, bullying, violent acts that perceptibly carried no intent, and incidents that resulted in no injury. Front-line staff also identified barriers to reporting, such as complicated and long reporting systems, little time to report during work hours, a lack of follow-up after a report was made, and fear of reprisal.

Emerging from the research findings are a number of factors that decision-makers might consider when developing, implementing and reviewing violence prevention programs. Examining the needs of different departments and staff will provide important information, while input from front-line staff can provide valuable insight. We hope the issues raised in this study will help provide stakeholder perspectives on ongoing challenges, as well as strategies for improvement, says Kosny. However, it’s important to remember that these workplaces volunteered to be part of this study, so they were likely more motivated and farther ahead than many others in their violence prevention programs. 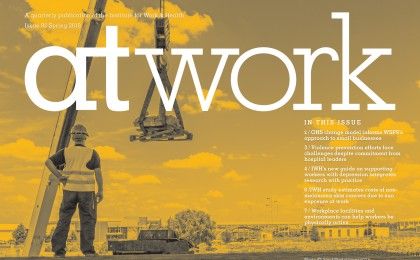