IWH research adds to body of knowledge on MSDs

It wasn’t always evident that changing a worker’s posture or reducing time on certain tasks could prevent painful soft-tissue disorders.

Over the past two decades, these connections have been established through research. The Institute for Work & Health (IWH) has contributed significantly to this body of knowledge about musculoskeletal disorders (MSDs).

About two-thirds of the Institute’s current projects focus on MSDs, says Dr. Cam Mustard, President and Senior Scientist. The burden of MSDs remains high, as they are still responsible for the majority of lost-time claims. Research helps provide guidance on effective ways to reduce this burden through prevention and treatment measures.

With colleagues at the University of Waterloo, the research team identified three forces on the spine that increase the risk of low-back pain. The findings suggested that reductions in these forces, through job redesign, would reduce the rates of low-back pain. This study was published in the American Journal of Public Health in 2001.

Another major Institute study showed that, after the introduction of an ergonomic program, frequent and severe pain declined among workers with repetitive strain injury (RSI) at a large Toronto newspaper.

This study, undertaken by IWH Senior Scientist Dr. Donald Cole and colleagues, interviewed workers before and after the program was implemented. Researchers found that concern by supervisors was associated with reduced pain in workers. Also, more time spent using a computer mouse increased work disability. These findings were published earlier this year in International Archives of Occupational and Environmental Health.

In a current study, Cole and colleagues are examining how best to sustain MSD prevention programs in workplaces over time. In collaboration with the Centre of Research Expertise for the Prevention of Musculoskeletal Disorders (CRE-MSD), this project revisited four plants that introduced a participatory ergonomics team facilitated by the researchers. The study is exploring where and when the programs are sustained after the researchers withdrew.

A colleague is examining the role of different kinds of management commitment in supporting change, says Cole. The results should be quite interesting.

In another large project, the effectiveness of a participatory ergonomics program is being investigated in six firms in the electrical and utilities sector. The project involves new approaches to implement MSD reduction programs in which ergonomists at the health and safety association – in this case the Electrical & Utilities Safety Association (E&USA) – are champions of a sector-wide initiative, says Dr. Phil Bigelow, IWH Scientist. The idea is to create lasting partnerships that use resources more efficiently.

The partnership, which includes researchers from CRE-MSD, IWH and E&USA, has been designed to be participatory as well.

The construction sector faces unique challenges in implementing interventions IWH research adds to body of knowledge on MSDs to prevent MSDs. Bigelow is involved in a project in this sector to identify barriers and approaches to encourage the use of effective interventions. Fifteen firms have been provided with ladder lifts to help workers place and remove ladders from trucks, rather than doing so manually.

We are exploring how ergonomic changes are perceived, and accepted or rejected by workers and by firms. This information will help find better ways to bring ergonomics research into practice says Bigelow.

In addition to prevention, treatment is another area of research and expertise at IWH. In the early 1990s, the Institute was involved in developing the first evidence-based low-back pain guidelines published by the U.S. Agency for Health Care Policy and Research.

In 1995, the Institute sponsored the founding of the Back Review Group of the Cochrane Collaboration. Cochrane is an international group that conducts systematic reviews of research on the effectiveness of clinical treatments. The Back Review Group focuses on treatments of neck and back pain and other spinal disorders.

Equally important is ensuring that soft-tissue injuries are accurately identified, particularly by compensation boards. Problems may occur when a disorder is uncommon or difficult to diagnose. In a recent study, published in the American Journal of Industrial Medicine, IWH Research Associate Dwayne Van Eerd and colleagues proposed a new approach to identifying soft-tissue injuries.

Their approach uses a broader set of codes than usually used by the Workplace Safety & Insurance Board (WSIB). Using this approach, they captured neck pain cases more accurately from a sample of WSIB claims. 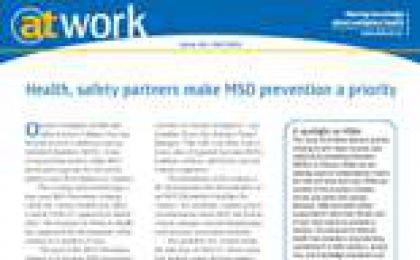