It is a well-established fact that health-care workers face a higher risk than other workers of developing painful musculoskeletal disorders (MSDs), which affect muscles, tendons, nerves or other soft tissues. In health-care workers, back pain is one of the most common MSDs. In Ontario alone, approximately 400,000 people are employed in the health-care sector.

There are many programs designed to prevent MSDs in health-care workers, ranging from the use of mechanical patient lifts to physical exercise programs to ergonomic programs.

But are these programs all effective? And which ones are better? The Institute for Work & Health recently completed a systematic review of all the research on programs designed to prevent MSDs in health-care workers.

One goal was to provide decision-makers with scientific evidence to help choose effective programs.

One of the main causes of MSDs in health-care workers occurs from lifting or transferring patients, says Dr. Benjamin C. Amick III, the Institute’s scientific director, who led the review. These patient handling activities place high levels of force on the low back. In fact, they far exceed the lifting limits recommended by the U.S. National Institute for Occupational Safety and Health.

Recent research also suggests that MSDs in health-care settings may also result from other events such as assaults by patients, slips, trips and falls. As well, MSDs occur from non-patient related health-care jobs or tasks, such as maintenance work.

Jessica Tullar, a PhD student of Amick’s, had been researching interventions in nursing homes and was surprised to find few studies in this area. Tullar is at the University of Texas School of Public Health in Houston, Texas.

Until now, there has been only one systematic review on injury prevention for patient lifting, but no one has reviewed the broad spectrum of programs in health-care settings.

There is also moderate evidence that the following two interventions had a positive effect:

A joint Canadian-U.S. team was assembled to conduct the review, including reviewers from the Institute and from the University of Texas.

The team addressed the following research question: “Do occupational safety and health interventions in health-care settings have an effect on musculoskeletal health status?”

To answer this question, the reviewers followed a set of systematic steps. First, they identified more than 8,400 possible articles of interest in their search of various databases. These studies had been published in journals in which independent scientists peer-reviewed the research.

The reviewers identified 40 studies that had information relevant to their research question. After assessing the quality of each study, reviewers found 16 studies whose quality was sufficient to give them confidence in the findings.

From these 16 studies, the review team concluded there was moderate evidence that prevention programs had a positive effect on workers’ musculoskeletal health in health-care settings. Moderate evidence meant at least two studies of medium-high quality agreed on the same findings.

Reviewers also found moderate evidence for two specific programs. Because the evidence wasn’t strong, these should be taken as ‘practices to consider’ rather than ‘best practices’  or policy recommendations, says Shelley Brewer, also an author and  doctoral student of Amick’s at the University of Texas.

One practice to consider was patient handling interventions with the following three components:

Two out of three studies on this three-part intervention showed positive effects. In one study, the intervention reduced lost or restricted workdays, injury rates and workers’ compensation rates. In the second study, there was a reduction in low-back and shoulder pain reported by workers. The third study showed no effects.

In all studies, there were positive health effects. Workers reported a decline in pain symptoms, including reductions in the frequency, intensity and duration of their pain.

Does this evidence mean that the other interventions were not effective? Not at all, the reviewers reassure. For many programs, there was only one study that looked at their impact.

Some examples of these other interventions included: back school (an industry-based program), cognitive behavioural training (such as coping and communication training or relaxation training) and broad-based MSD prevention programs (in which an ergonomist visited the site, followed by training or exercise and ergonomic changes).

An important part of the review was to include stakeholders from relevant fields to provide feedback on various aspects of the review.

Workplaces do not have the resources to access research and may not have the skill to interpret scientific papers, says Anne Duffy, provincial ergonomist with Ontario’s Ministry of Labour, who participated in the review process. Having the Institute do these systematic reviews is of great value.

Representatives from hospitals, nursing homes, government agencies, professional associations, insurance companies and lift  manufacturing companies were invited to meetings at the start of the review and at the end, to hear results. These meetings were held at the Institute and at the University of Texas.

Duffy says that the process helped her, as a non-researcher, understand the importance of systematic reviews.

It is encouraging that Ontario seems to be headed in the right direction with the Patient Lift Initiative, she says. The initiative requires facilities to have the three patient handling components that the systematic review showed had a moderate level of evidence.

However, she admits that she was surprised that there were so few studies of high quality. One message, simply, is that more work needs to be done.

Why did so many studies not make the quality cut-off point? There were a number of reasons. They included the way studies were designed, the reporting of statistics, and how the final results were reported.

The systematic review process teaches researchers what information they need to include when they’re writing about their own studies, says Tullar. If, as a researcher, you don’t say exactly what you did, you can’t get credit for it.

Another important message from the review is that the current state of peer-reviewed research has limited high quality evidence on the effectiveness of MSD prevention programs.

We are frustrated that we are unable to make stronger recommendations, says Amick. The overwhelming message from our review is that more high quality research must be produced, and we consider this a priority.

For a full copy of the review in PDF format, please visit our website at: www.iwh.on.ca/sys-reviews/interventions-in-health-care-settings-to-protect-musculoskeletal-health-a-systematic-rev.

Canadian nurses report higher rates of back pain and physical demands at work, compared with the general working population. These findings emerged from a landmark survey released in December 2006 by Statistics Canada, the Canadian Institute for Health Information and Health Canada.

Nearly 19,000 Canadian nurses participated in the 2005 National Survey of the Work and Health of Nurses. It was the largest, most comprehensive survey ever conducted on the working conditions of Canadian nurses.

Two scientists from the Institute for Work & Health, Drs. Benjamin C. Amick III and Michael Kerr, served on a national advisory group for the survey. The Institute was also involved in initiating the project in 2000.

An estimated 314,900 Canadians were employed as regulated nurses in 2005, including registered nurses, licensed practical nurses and registered psychiatric nurses. About 95 per cent of Canadian nurses were women.

Some of the findings from the survey: 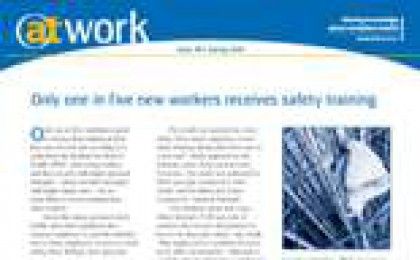