Using youth employment centres for the first time to connect with out-of-school young workers about job safety, a new Institute for Work & Health study shows this hard-to-reach group possesses some basic knowledge of health and safety, yet it still experiences above-average injury rates.

They’re young, but may have to work to pay for their food and shelter. They’re mostly involved in temporary work in the accommodation, food services or retail industries. Their workplace injury rates are higher than average, yet they are familiar with the basics of workplace health and safety.

“They” are the subject of a new study that presents a detailed snapshot of a group of young workers who are particularly vulnerable to injury or illness: those aged 15 to 24 who are out of school – and especially those without a high school diploma. These young workers have higher work injury rates than those still in school. They are also considered harder to reach with high quality workplace health and safety programs.

The Institute for Work & Health (IWH) teamed up with First Work: Ontario Association of Youth Employment Centres to learn more about this group through an online survey. The survey was administered through most of the 70 First Work centres, which work closely with 42,000 youth each year.

The survey was unique in a number of ways, says Dr. Curtis Breslin, an IWH scientist who led the study. Young workers were asked about their workplace injuries, exposure to unsafe conditions and safety training. More than 1,880 of these “hard-to-reach” young workers responded to the survey.

It was a real breakthrough study, says Matt Wood, First Work director. This is the first time youth employment centres have been specifically asked to be involved in workplace safety.

The study findings provide insights that point to practical recommendations. Having a job was important to these young workers, as more than half spent most or all of their earnings on basic necessities. Half were currently in school, and almost half were between 16 and 18 years of age.

The top three unsafe work conditions reported were exposure to dust or particles, trip hazards such as slippery or uneven floors, and heavy lifting. Overall, 12 per cent of these young workers reported having an injury that limited their activities over the past year. The most common injuries were cuts, burns, bruises/blisters, and sprains and strains, which is consistent with past research, says Breslin.

Just over six per cent reported a repetitive strain injury (RSI). This is the first time we’ve heard about RSI in this age group, says Breslin. This may be a breeding ground for these kinds of compensated injuries later in their lives.

About 66 per cent said they had received safety training at work, on topics such as using equipment safely, protective equipment use, getting help in unsafe situations and reporting hazards. However, a significant number, four in 10, received their training solely in the form of a video.

This is the least effective approach to achieve the goal of long-term retention, says Breslin. To help young workers retain the information, the researchers advise workplaces to increase supervision and use one-on-one training, rather than only relying on a video.

Wood wants to move forward in the area of workplace health and safety. We need to build some momentum around being the voice of the most vulnerable young workers, he says. He also sees a role for employment centres in safety conversations with employers, which has been limited to date.

To read a copy of the report, visit: www.iwh.on.ca/youth-employment-centres. 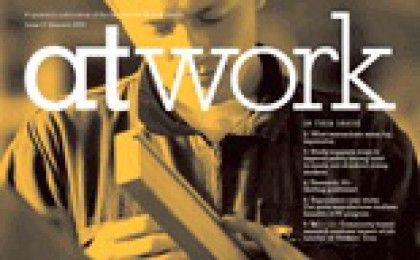