Sally (a pseudonym) was laid off from her administrative position at a London, Ontario-based investment firm in November of 2008. Although she had several years of experience in her field, she was unable to find a permanent full-time job. Instead, she found temporary reception work.

I went on many interviews and noticed that most companies were offering only temporary placements, says Sally, who has been in her current position for just over one year.

Sally’s experience is borne out by a noticeable trend in employment statistics. According to Statistics Canada, between October 2008 and October 2009, the number of permanent employees in Canada declined by 3.8 per cent, while the number of temporary employees (individuals in jobs that may have an end date or a specific term) increased by 0.7 per cent. The number of employees with temporary jobs rose to 13 per cent in 2007 from 11 per cent in 1997.

For more than eight years, Institute for Work & Health (IWH) researchers have explored the impact of temporary employment and other non-standard work forms and arrangements on worker health. With temporary employment on the rise in Canada, IWH scientists are looking into several aspects of how temporary jobs relate to health and safety.

IWH Scientist Dr. Emile Tompa, along with IWH Post-doctoral Fellow Dr. Heather Scott-Marshall and Research Analyst Miao Fang, recently published two studies that examined the impact of temporary employment on sickness absences of more than one week. In other words, were temporary workers more or less likely to take time off for a serious health condition?

Workers in temporary positions may be more likely to experience negative health effects for a variety of reasons. These include higher physical health risks due to riskier job assignments and insufficient occupational health and safety training, psychosocial stress related to job insecurity, and low income which can lead to poor living conditions or inadequate nutrition, says Tompa, a labour and health economist. Published research shows that temporary workers may be more likely to be exposed to more hazardous jobs and have higher levels of work injury than permanent workers.

In the short-term, it may appear to be financially worthwhile for firms to hire workers on a temporary basis. Today, some firms may be reluctant to hire full-time permanent workers because it can be expensive and restricting, says Tompa. Firms that rely on ad hoc staffing – such as temporary workers – have greater flexibility to increase or decrease their workforce as needed in line with market demands.

In the first study published in the December, 2008 edition of Occupational and Environmental Medicine (vol. 65: pp. 801-807), the research team analyzed data from Statistics Canada’s Survey of Labour and Income Dynamics (SLID). The researchers looked at work situations and work-related sickness absences of 4,777 workers from 2000 to 2003. The SLID asks questions on up to six jobs per year, as well as on income sources and amounts, health information and sickness absences lasting for one week or more. The SLID also asks questions about the nature of the employment contract for each job, specifically whether the job is permanent or temporary.

The study analyzed the time from the start of a job to the first work-related sickness absence lasting seven days or longer. While focusing on the impact of temporary employment on the probability of sickness absence, the researchers also accounted for items such as the workers’ length of employment, job characteristics, health and other factors.

The research team took this study one step further: they looked at the impact of temporary employment on all sickness absences, regardless of whether or not they were work-related. In this study, no distinction was made about the cause of the illness or injury because workers may not be able to directly attribute their sickness as being work-related, even though they recall being absent for one week or more.

For this study, we had a sample of 5,307 individuals who experienced 9,574 distinct jobs, says Fang. About 40 per cent of the job episodes were temporary. A total of 6.6 per cent of the job episodes (or 635 absences) had a sickness absence of one week or more in this sample. The research team also controlled for factors such as job tenure, prior health status and individual characteristics such as gender and age.

Among the results of this study – to be published in an upcoming edition of Work (in press) – researchers found that workers in temporary jobs were 37 per cent less likely to be absent due to all-cause sickness compared to those with permanent positions. Workers with tenure of one to three months were 27 per cent less likely to take an absence than workers with longer job tenure.

In both studies, the researchers also included two other measures related to social protection: union membership and firm size. Union membership can offer some protection from health risks such as improving access to health and safety training, plus it can provide better job security and higher wages and benefits.

The results from the all-cause absence study suggest that workers with a union membership had a 40 per cent higher probability of being absent than those without a union membership. This suggests that having social protection makes it possible to take time off to recover from a sickness.

We controlled for firm size since we thought that workers in larger firms would be less likely to have an absence because large firms may have more standardized and well-developed human resource practices and perhaps more formalized health and safety training programs and thus lower levels of health risk exposures, says Tompa. But the researchers found that those who worked in large firms were equally as likely to have an absence as those in small firms (those with less than 20 people).

As the researchers note, if workers don’t have social protections in place – such as a permanent job contract or union membership – it may prevent them from taking sick leave, even in the case of serious health concerns that would normally require an absence of one week or more.

As expected, those in manual jobs were 39 per cent more likely to be absent than those in non-manual jobs, according to the all-cause study’s results. Individuals in manual jobs are generally exposed to higher levels of physical health risks because of the nature of their work.

By contrast, people who held more than one job at the same time had fewer absences. I was very surprised by this finding. I expected to see an increase in absences for these individuals, Scott-Marshall notes. It may be that individuals that hold multiple jobs don’t or can’t take time off. They may have greater work engagement for a variety of reasons or are more resilient to adverse health exposures.

The information from these studies can help to identify employment situations with inadequate social protection. The researchers note that having the ability to take time off work to recover from a serious illness may have important implications for the long-run health of the individual worker affected, as well as the workforce at large. In addition, having an understanding of the employment situations where there are greater health risk exposures can provide insight into where to direct health and safety resources.

Although holding a temporary job was a new experience for Sally, in the long run things worked out for her. She went back to school part-time to gain more education, and her current employer gave her the flexibility to complete her studies. My company helped me while I was in school, but the company didn’t need to hire a full-time employee when the markets were not doing well, she says. Others may not fare so well, and may continue to work in temporary jobs for long periods of time.

Temporary work agencies have become an important part of the dynamic labour market. Temporary workers can offer organizations a certain flexibility that can accommodate quick changes in line with market demands, while reaping cost savings in labour and other expenses.

Led by Institute for Work & Health Scientist Dr. Ellen MacEachen, a team of researchers is conducting a qualitative study to examine how temporary work agencies manage injury prevention and return to work. In particular, the team is exploring the unique three-way employment relationship among the temporary worker, agency and client employer that can present challenges. The study is funded by the Workplace Safety and Insurance Board’s Research Advisory Council.

The research team is interviewing key people – including temporary workers, workplace managers, agency personnel and “key informants” (people who have direct experience and deep knowledge of the temporary work agency sector) – to understand the complex world of these agencies.

Although this study is still ongoing, some preliminary findings may point to certain challenges that may have implications for temporary workers’ health and safety.

For instance, the research team sought to understand why workers seek temporary agency work. Among the reasons, some workers found work through a temporary agency to keep busy or to have flexible employment. Other workers went to agencies because they needed immediate work for financial reasons or had an employment background that was not attractive to regular employers. For example, recent immigrants whose past job experience was not recognized by Canadian employers used temporary work agencies to find work.

The research team continues to investigate and understand how the agencies work. The final results of the study will be available in 2012. 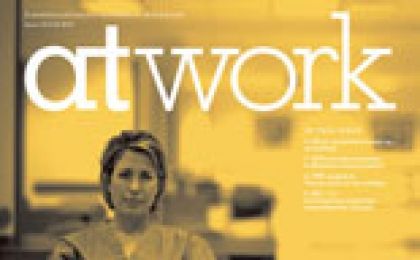