Dr. Clyde Hertzman has been named Canada’s 2010 Health Researcher of the Year, the highest scientific honour from the Canadian Institutes of Health Research (CIHR). This prestigious award recognizes Hertzman’s work on early childhood development. His research findings have helped shape national and international policy on youth. A former founding member of the Institute for Work & Health (IWH)’s Scientific Advisory Committee (SAC), Hertzman – director of the Human Early Learning Partnership (HELP) in British Columbia – chaired the SAC from 2002 to 2008.

IWH Associate Scientist Dr. Andrea Furlan is making room on her mantle for several recent awards. Last fall, Furlan was named the 2011 winner of the Canadian Pain Society (CPS)’s Early Career Award. The award acknowledges Furlan’s important contributions to pain research. As part of the honour, she will give the keynote address at the CPS annual conference in April.

Furlan also received the 2010 Graduate Literary Award in Health Sciences Evaluation from the University of Toronto for the paper “Opioids for chronic noncancer pain: a new Canadian practice guideline.” It was published in the Canadian Medical Association Journal in June of 2010.

Finally, one of Furlan’s research papers – co-authored by IWH Research Associate Nancy Carnide – made its way on to the Top 10 AMEDEO Pain list, which is sent to thousands of clinicians around the world. AMEDEO dispatches weekly emails about new scientific publications to health-care professionals. The paper is entitled “Opioids for workers with an acute episode of low-back pain,” and can be found online at ww.ncbi.nlm.nih.gov/pubmed/20727677.

IWH board chair appointed to committee

John O’Grady, chair of the IWH’s Board of Directors, has been appointed to the advisory committee of the Workplace Safety and Insurance Board (WSIB)’s Funding Review. The year-long Funding Review, announced in September 2010, is chaired by Professor Harry Arthurs, former dean of Osgoode Hall Law School and president-emeritus of York University. The review’s mandate is to advise on the WSIB’s long-term financial viability, including a plan on how to eliminate the unfunded liability. 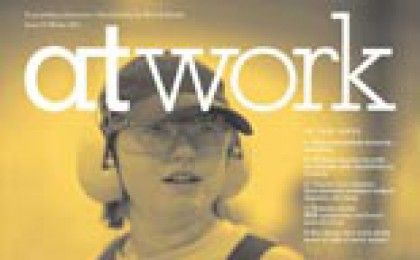