An attitudinal barrier still prevents people with disabilities from being gainfully employed, says the Honourable Lt. Gov. David Onley at the official launch of the Centre for Research on Work Disability Policy.

An attitudinal barrier still prevents people with disabilities (PWDs) from being gainfully employed and thus achieving their full potential to contribute to society. This was the message of the Honourable Lt. Gov. David Onley, the keynote speaker at the official launch of the Centre for Research on Work Disability Policy (CRWDP). The launch took place on February 4 at McMaster University in Hamilton, Ont.

This barrier is an ethical one that manifests itself in the attitudes of employers who, despite study after study and case example after case example, will not look beyond a person's disability when it pertains to hiring people with disabilities, said Onley, as he expressed his support for the new research centre. The centre hopes to address the high unemployment rates of people with disabilities by exploring how current work disability policy in Canada can be improved to help PWDs find, return to and sustain work.

People with disabilities represent about 15.5 per cent of Ontario’s population (similar percentages apply across the country), making PWDs the largest single minority group in the province. It is also the only minority group that any single person can join at any time, through illness or accident, a visit to the doctor or, quite simply, getting older, Onley said.

For people with disabilities, this is not a Great Depression; it is a perpetual depression, Onley said.

According to Onley, companies don't hire PWDs because they believe a number of myths: namely, that PWDs have higher absenteeism and lower job retention rates, and that they come with high accommodation costs. Yet Onley pointed to three recent studies—a 2009 Compas survey, a 2010 Deloitte white paper and a 2013 federal report titled, Rethinking disABILITY in the private sector—that all show the opposite: hiring PWDs is good for business.

If you hire someone with a disability, you will probably be admired by your family, be recognized by some social group that gives you an award ..., all sorts of positive things like that, Onley said. But none of these are reasons to hire someone with a disability. The reason to hire is the same reason Kevin O’Leary [of Dragons' Den fame] would hire, and that is to make money. People with disabilities increase productivity.

How? According to the studies cited by Onley, PWDs have, on the whole, lower absenteeism rates and higher job retention rates. Their peers find working alongside disabled colleagues to be a rewarding experience, leading to happier, more productive workforces. And a better understanding of the disability community is good for business, given that 53 per cent of the population (in Ontario) either has a disability or an immediate family member with a disability.

Hiring PWDs also benefits society, Onley said. Everyone benefits when PWDs are not reliant on government assistance but, rather, become something we should all be proud to be—taxpayers.

Onley is glad to see the new centre recognizes that more than research evidence is needed to achieve social change, and that people in positions of authority and leadership are also needed to speak up. That is the challenge that I suggest we all need to take away, he said. It's my hope that seven years from now [at the end of the centre's funded mandate], you will be able to, in effect, shut down for one simple reason: you have fully succeeded.

For a full report on the CRWDP’s launch, including comments from other speakers, watch for launch highlights in the centre’s next newsletter and postings of launch notes on its website: www.crwdp.ca.

The Centre for Research on Work Disability Policy, led by two IWH scientists, aims to improve how people with disability are supported in the labour market 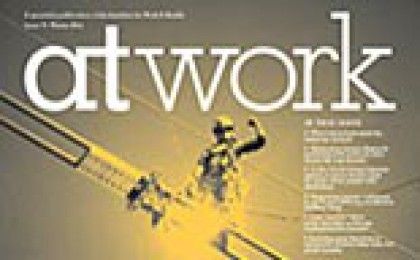