The study by the Institute for Work & Health (IWH) looked at the individual and family incomes of workers’ compensation recipients with permanent impairments under four different programs: three in Ontario and one in British Columbia. Taking into account both job earnings and workers’ compensation benefits, the study found individual injured workers fared only slightly worse than their uninjured counterparts in terms of their poverty levels. When family incomes (relative to family size) were taken into account, the poverty levels of injured workers’ families and the families of their uninjured peers were essentially the same.

This is the first study to examine poverty in terms of the financial trajectory of workers who are permanently impaired from a work injury, says Dr. Emile Tompa, economist and senior scientist at IWH and lead author of the study. It serves as a reminder of the importance of workers’ compensation benefits in cushioning the impact for injured workers.

The methods used to carry out this study were quite complex. The study looked at long-term disability claimants under four workers’ compensation programs (see box on next page for a description of these programs). By linking these claimants with Statistics Canada’s Longitudinal Administrative Database (made up of 20 per cent of all Canadians who file taxes), the researchers were able to gather information on the individual and family incomes of about 20 per cent of injured workers under each of the four programs, for a total of about 27,000 injured workers.

To examine how these injured workers compared to their uninjured peers, the research team matched each injured worker with up to 10 uninjured workers (controls) also in the Statistics Canada tax-filing database. The uninjured controls were similar to the injured worker in terms of age, sex, province of residence, marital status, presence of children, individual income and family income in each of the four years before the injury.

The poverty levels were determined using Statistics Canada’s low-income measure, which is set at 50 per cent of the median (i.e. mid-point or middle) income in any given year. In 2007, for example, the after-tax low-income measure for a single adult with no children was $16,025. For a family of two adults and two children, it was $32,050 after tax.

The study team classified annual earnings as follows (with corresponding amounts in 2007 after-tax dollars for an individual and a family of two adults and two children):

Using these methods, Tompa and his research team came up with three main findings.

Looking at after-tax family income (adjusted for family size) and at absolute levels (not in comparison to controls) the proportion of injured workers in deep poverty was between zero and two per cent of the total sample of injured workers. For poverty, the range was two to six per cent. For near poverty, the range was between six and 12 per cent. The ranges reflected a slight increase in poverty levels over time post-injury under all four programs.

The difference for the nearly poor category ranged from two per cent lower to four per cent higher. Notably, for deep poverty, the proportion of injured workers was consistently 0.5 per cent lower than that of non-injured peers.

Family income is an important part of the picture, says Tompa. The convention in poverty analysis is to take into account all income sources after tax at the family level, because that’s closer to how things are in the real world. Families pool resources together.

(2) Workers’ compensation benefits play an important role in keeping poverty levels of injured workers on par with their non-injured counterparts.

Take, for example, Ontario’s Loss of Earnings program. Among its permanently impaired beneficiaries, approximately 36 per cent were estimated to have labour market earnings at or below the threshold of Statistics Canada’s low-income measure six years following injury—compared to approximately 17 per cent of their non-injured counterparts. When compensation benefits were included with individual labour market earnings, the proportion of permanent impairment beneficiaries at or below the low-income measure threshold declined substantially, to 16 per cent.

This finding demonstrates the importance of workers’ compensation benefits in cushioning the financial impact of injury for the people in poverty, says Tompa.

(3) Poverty levels among injured workers did not change in any substantial way, from one program to the next.

One of the reasons we undertook this study was the concern voiced by many injured workers that poverty was growing more prevalent under the most recent workers’ compensation program in Ontario, says Tompa, who is also the co-director of the Centre for Research on Work Disability Policy. It turns out that does not seem to be the case.

One potential area of concern, says Tompa, was the increasing proportion of injured workers and their families living in near poverty under Ontario’s current Loss of Earnings program. When looking at family income over a 10-year period, the LOE program had the largest difference between the proportion of injured worker families and their matched control families living in near poverty, says Tompa. This might suggest that injured worker families receiving benefits from this program did not fare as well over longer periods of time as individuals receiving benefits from the other programs. The difference was 2.5 per cent for near poverty for the LOE program, 0.5 per cent for the FEL/NEL program, no difference for the PD program, and 0.6 per cent for the program in B.C.

Because we used tax-filing data, we have confidence in the findings we presented in this study of poverty levels among people who experienced a work injury and became permanently impaired, says Tompa.

We were also able to paint detailed pictures of financial outcomes for injured workers with compensation claims in different programs. What still needs to be explored is the poverty levels of people who become injured or ill as adults but do not qualify for workers’ compensation. Our research helps us understand where to focus our next research efforts in terms of the adequacy of support.

It also points to the importance of workers’ compensation benefits in cushioning the financial impact for injured workers. If only workers’ after-tax earnings from employment were taken into consideration, many would be in poverty, says Tompa.

His report on the study, which was presented to an injured worker group at Injured Workers’ Consultants in the summer of 2014 and to the Workplace Safety and Insurance Board (WSIB) in the spring of 2015, is now available. 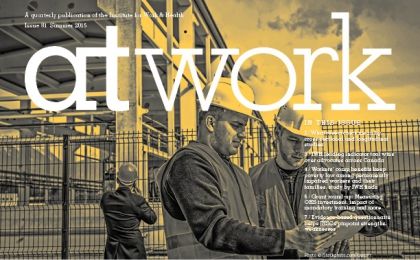