Research evidence has been accumulating on the adverse health consequences of night, evening and rotating shift work. Now new research is suggesting that, not only are shift workers at greater risk of work injury, they are more likely to have a harder time recovering should an injury occur.

What the findings suggest is recovering from a work-related  injury might be more difficult for people doing shift work, says Wong, holder of the Institute’s Mustard Fellowship in Work and Health 2013-2015. But despite these difficulties, injured shift workers remain employed in their shifts.

The study used data from Statistics Canada’s National Population Health Survey (NPHS), which followed a representative sample of adult Canadians every two years from 1994 to 2010, surveying them about a number of health issues. Of the 17,730 individuals in the sample, the research team found 1,650 individuals who (a) were between 16 and 65 years old, (b) earned a wage or salary, and (c) had experienced an injury at work severe enough that their normal activities were limited. The team matched each of these injured workers with four uninjured people, for a total count of 9,540 participants.

The team used NPHS survey results during the year of work injury to determine a number of baseline characteristics of the injured workers and their non-injured controls. These characteristics included health scores, which were calculated based on self-reported levels of impairment along a broad spectrum including vision, hearing, speech, mobility, dexterity (use of hands and fingers), cognition (memory and thinking), emotion, and pain and discomfort. Importantly, the characteristics also included shift schedules, which were broken down into two groups: regular daytime shifts and non-standard shifts (i.e. night, evening or rotating shifts).

The research team then examined the survey responses of the injured workers and their controls two years after the injury. In particular, they looked at respondents’ health scores, as well as whether or not they were working a different shift schedule or had left the labour force.

The researchers found that, as has been shown in previous research, people working non-standard shifts reported more work injuries (34 per cent) compared to people working daytime shifts only (25 per cent).

The researchers also found that, after taking age, gender, education and physical job demands into account, workers in non-standard shifts who had been injured on the job had poorer self-reported health scores two years later than workers in standard shifts who had also been injured. They also reported poorer health scores than non-injured workers doing shift or regular daytime work.

However, injured shift workers were not more likely to change their shift schedules or to leave the labour force than injured workers doing regular daytime shifts.

There's a good-news-bad-news story in these findings, says Wong. The good news is the ability of shift workers to stay employed isn’t jeopardized by injury—any more so than standard daytime workers. On the other hand, she notes, the health scores of these shift workers do decline after the injury, which means that they’re showing up at work in poorer states of health.

The implication may be that additional resources may be needed to assist shift workers after an injury, Wong says.

Wong shares these and other findings from her shift work studies in a video recently released by IWH. To see it, go to IWH’s YouTube channel at: www.youtube.com/watch?v=wSTN0twNeP8 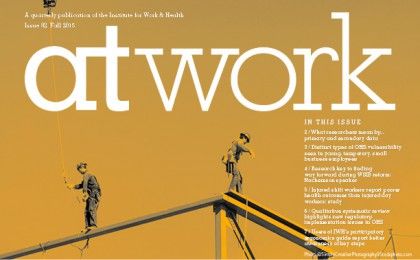