Peer coaching on patient lifts lowers injury, but at a small cost

A peer-coaching program introduced to help health-care workers use patient lifts resulted in a large drop in injuries related to patient handling—but at a small net cost to the system, an Institute for Work & Health (IWH) study has found.

The program was introduced in British Columbia across 15 long-term care facilities between 2006 and 2011. It led to a 34 per cent reduction in injury rates during the program time period and a 56 per cent drop after the program was over—a benefit of 84 cents for every dollar spent on the program, according to the study.

Our calculations show that 62 lost-time claims were prevented as a result of this coaching program, says Dr. Emile Tompa, labour economist and senior scientist at IWH who led the study, published online in December in the journal Occupational and Environmental Medicine (doi: 10.1136/oemed-2015-103134).

We also saw that the benefits of reduced injuries lasted even after the program ended, which reflects the new skills gained as a result of the coaching.

The benefits that Tompa and his team were able to measure in monetary terms were slightly less than what the program cost. But the benefits were likely underestimated, Tompa points out. We were unable to track and monetize many potential benefits, such as shorter work absences, improved labour relations and better patient care. Had we been able to take those into account, we might have found this program to be cost-beneficial.

Patient handling is one of the major causes of work-related injuries incurred by caregivers in institutional health-care settings. To reduce the physical demands of patient handling, many jurisdictions in Canada have introduced patient lifts, often along with policies eliminating manual lifting of patients. However, some studies suggest that the purchase of lifting equipment alone is not enough, and that training and coaching are key to program effectiveness. The program at the heart of this study included the training of designated workers as peer coaches at each of the facilities. A training module was developed and evaluated through a pilot study using focus groups. The training was delivered over five days, with one-day refresher sessions scheduled three months after. Once trained, these designated workers provided both formal and informal coaching to their nursing peers. Coaches were allowed to dedicate one 7.5-hour shift a week to coaching duties throughout the duration of the program, which varied across the facilities but averaged around two years.

For the study, Tompa’s team examined lost-time claims that were attributed to patient handling. Injuries that did not result in time off work (i.e. no-lost-time injuries) were not part of this study.

The researchers also compiled data about the facilities to take into account potentially confounding factors such as staffing levels, number of beds set aside for high-risk patients, number of ceiling and floor lifts per bed, among others. Facilities that had installed the equipment but had not yet introduced the peer-coaching program were used as study controls.

For the cost-benefit analysis, the team relied on both administrative and human resource records and interviews with facility managers. On the cost side, Tompa included the costs of planning and promoting the program, the peer coach training, and time spent coaching (including the time of both the coach and trainee on a weekly basis). On the benefits side, the team calculated the costs that would have been incurred due to a lost-time injury. These included time spent on claims administration and accommodation expenses, which would have been borne by the employer, as well as health-care expenses and six-month wage replacement benefits that would have been paid by the insurer (e.g. the workers’ compensation board). For the individual worker, the team calculated out-of-pocket costs, based on a study Tompa co-authored that looked at the non-wage losses incurred after a work-related injury.

The analyses suggest that, altogether, the program cost $894,000 and delivered $748,000 in benefits—a modest net cost to the system.

The challenge, though, is that all the costs are borne by the long-term care facilities, and the savings largely go to the insurer or workers’ compensation agency, says Tompa. As a result, the right incentives need to be set up for health-care organizations to support such a program.

Tompa also notes that this cost-benefit analysis is rather conservative in that it does not take into account many benefits, including some that cannot be easily quantified. A potential reduction in no-lost-time claims was not taken into account, nor was a potential decline in number of days off for lost-time claims. The impact of improved care on patient outcomes and the value of improved labour relations as a result of the program were also not included in this analysis.

And one key value that we could not include was the intrinsic value of improved health-related quality of life for the worker, says Tompa. If we had included that in our analysis, it would be hard to argue that the benefits did not outweigh the costs. 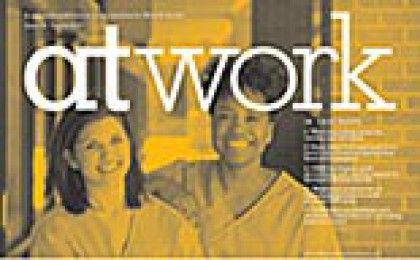