One argument sometimes raised when employers are urged to pay attention to occupational health and safety (OHS) within their organizations is that an OHS focus takes away from operational effectiveness. It’s the “trade-off” argument, which says organizations can choose to excel at operations or OHS, but not both.

An alternative view is that operations and OHS can be complementary—even synergistic. Supporters of this perspective argue that many of the best practices in quality management are also best practices in safety management. Thus, organizations that implement these practices can achieve excellence on both the operational and OHS fronts.

In essence, employers that adopt the JMS approach, which allows for the coordinated management of both operations and safety, do significantly better across the board compared to those that don’t. The research provides empirical evidence supporting the integration of safety into operations, an idea that has been promoted by some OHS professionals based on their first-hand experience, says Robson. The study was published in the March 2016 issue of the Journal of Occupational and Environmental Medicine (doi:10.1097/JOM.0000000000000616).

The findings arise from the second phase of a two-phase research project that included scientists from Oregon State University, Ivey Business School at Western University and Schulich School of Business at York University. The project was led by Dr. Mark Pagell, a professor of sustainable supply chain management at the Smurfit Graduate Business School at University College Dublin.

The first phase was a qualitative study involving 10 workplaces in manufacturing and distribution, both unionized and non-unionized. The interviews conducted at these workplaces revealed two distinct types of employers. They differed in culture, management practices and organizational outcomes.

One type of employer had a workplace culture that was committed to safety, exercised discipline in how work was done, embraced employee participation and focused on prevention. These employers used certain JMS practices that supported both operations and safety: they focused on processes and adhered to rules; held everyone accountable for safety; explicitly considered safety in the design of work; supported frequent communication from managers about the importance of safe work; and incorporated safety considerations into the HR processes of performance appraisals and promotions. In addition, these employers showed superior performance in both operations and safety.

In contrast, the other type of employer had a “day-to-day” approach that emphasized meeting daily production goals. Employers of this type were relatively undisciplined and reactive in focus; they were not committed to safety and not encouraging of employee participation. And this second group showed low to moderate performance in both operations and safety. For more results of this first phase of the project, watch the slidecast of the 2012 IWH plenary on this research or read the article in the June 2013 issue of Safety Science (doi:10.1016/j.ssci.2012.12.008).

For the second phase of the project, the team recruited 198 manufacturers in Ontario that employed at least 100 full-time workers or equivalent to take part in the study. They asked both operational and safety managers at each participating organization to complete a questionnaire aimed at measuring specific JMS practices, including: clearly defining job tasks, identifying and controlling risks to operations and safety, monitoring both operations and safety, and communicating frequently about safety.

The combined answers were used to categorize organizations into one of four groups:

The survey included questions about how the organizations were seen to perform compared to their competitors in terms of cost, quality, delivery and flexibility. The team looked at how this varied among the four groups. The team also examined injury claims rates from the Workplace Safety and Insurance Board (compared to the average in their sector) to assess how organizations in Groups 1 through 4 performed in terms of claim outcomes.

When it came to safety performance, the researchers saw an analogous pattern. Group 1 (“JMS present”) performed better (e.g. lower standardized lost-time claim rate) than either of Groups 2 and 4, in which the safety manager assigned low scores for JMS. And safety performance for Group 3 (“operations-weak”) was no better than that of Group 1, suggesting there was no additional benefit to safety outcomes in having an “operations-weak” JMS.

The findings support the idea that organizations with JMS practices can be competitive and, possibly, even leaders in both operations and OHS performance, says Tompa.

The overall findings suggest there’s no trade-off between safety and operations, he adds. Rather, organizations that focus on both operations and safety can do well on both fronts.

Robson will discuss the findings at the 2016 Canadian Association for Research on Work and Health conference on October 16-18. For details, go to the conference website. 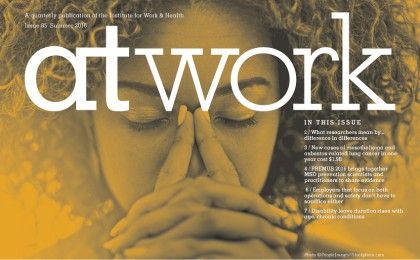