In 2005, when Kitchener-Wilmot Hydro Inc. was invited to join five other utilities to take part in a research project on preventing musculoskeletal disorders (MSDs), George Minow didn’t have to think too long about his answer.

It was simple to say yes, says Minow, Manager of Health, Safety and Wellness at Kitchener-Wilmot Hydro, a utility that today employs about 180 people and serves 91,000 homes and businesses in southwestern Ontario.

At that time, soft-tissue injuries were regularly the number-one or number-two cause of injury, says Minow. But in an industry where falls, burns and shocks are also common hazards, soft-tissue concerns often took a back seat, he adds.

To managers, the research project offered an opportunity to establish a group devoted to tackling MSDs. The project set out to examine the implementation of participatory ergonomics programs in small and medium-sized utilities where resources are scarce. Participatory ergonomics (PE) is an MSD prevention approach that involves active participation of employees in developing solutions and implementing change.

The research was conducted by a team from the Institute for Work & Health (IWH), the Centre of Research Expertise for the Prevention of Musculoskeletal Disorders (CRE-MSD), and the Electrical & Utilities Safety Association, which has become part of the Infrastructure Health & Safety Association (IHSA).

Today, nearly 10 years after the project concluded, it has continued to have a lasting effect: participatory ergonomics is still going strong at Kitchener-Wilmot Hydro. We have sustained a 30-per-cent reduction in soft-tissue injuries, even with an increase of staff,” says Minow. “And the severity of MSDs has decreased, as staff report symptoms earlier and so are helped faster.

At the outset of the project, the participating utilities each created an ergonomics change team made up of staff from different departments. All members of the team, called the Ergonomics Wellness Team (EWT) at Kitchener-Wilmot Hydro, received training.

They learned about soft-tissue injuries, how to fit work to the worker, how to get the most bang for the buck from an ergonomics program by making good purchases on new equipment, and how to choose cost-effective changes, says Minow. A questionnaire completed by employees at the start of the project helped the EWT and management understand that soft-tissue concerns existed across the utility. The results said to us, ‘You’ve got lots of work to do,’ says Minow with a small chuckle.

The ergonomics team helped bring in significant changes in how work is done at Kitchener-Wilmot Hydro:

Today, it’s not just Ergonomic Wellness Team members who look out for and take steps to reduce MSD hazards. Having the team has helped highlight the importance of ergonomics issues throughout the workforce, says Minow. Ergonomics is now considered in all that we do, by team members and non-team members alike.

Although the team has had a near complete turnover in membership since it was created, there has never been a question of disbanding it. When an opening comes up, there’s always a lot of interest. Quite a few people volunteer to be on it, says Minow.

What keeps it going is commitment, he adds. The team meets regularly every two months, and once a year, the team gets together with ergonomic change teams at other hydro companies to share ideas. Having things to work on also keeps the team going. You’re never really done.

Minow credits the research project many years ago for introducing participatory ergonomics to Kitchener-Wilmot Hydro.

I am very happy that we joined the program, he says, adding it has led to the creation of a team that works well and attracts those who are interested in helping others take steps to reduce hazards. Our company has won safety and wellness awards over the years, and this team is a jewel in the organization. It’s one of the most proactive things we do. 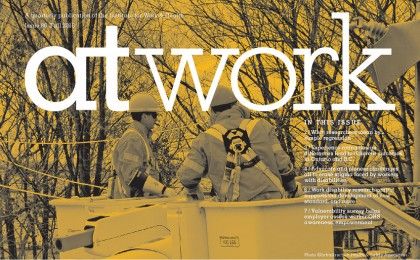