Occupational health and safety (OHS) vulnerability as assessed by a 27-item worker questionnaire has been found in a new study to be linked to higher rates of self-reported work injuries and illnesses.

The study, conducted by the Institute for Work & Health (IWH), provides support to the underlying premise of IWH’s OHS Vulnerability Measure that workers are not vulnerable to work injury because they belong to a certain group of people (e.g. young worker, newcomer) or do a particular type of work (e.g. temporary work, work in a small business).

Instead, the measure proposes that workers face health and safety vulnerability when they’re both exposed to hazards and report inadequate protection in at least one of three areas: OHS practices and policies, awareness of OHS rights and responsibilities, and empowerment to act to protect themselves. (An article about the measure can be found at in the Spring 2015 issue of At Work.)

Workers who are vulnerable, as defined by this measure, are at a much higher risk of injury than the least vulnerable workers—those who have adequate protections and no hazard exposures, says Morgan Lay, an IWH research associate and lead author of the study. The article, now online, is published in the April 2017 issue of Safety Science (doi:10.1016/j.ssci.2016.12.021).

The risk of injuries that result in time off work or need medical attention can be three to four times higher among the most vulnerable workers than among the least vulnerable.

This study is based on survey responses, collected in the spring of 2015, from over 1,500 adults in Ontario and British Columbia who were working at least 15 hours a week. In addition to the 27 questions that make up the measure, respondents were asked whether they experienced a work-related injury—either mental or physical—in the previous 12 months and, if so, if the injury resulted in time off work or medical attention. They were also asked if they worried about getting injured at work.

Nearly 90 per cent of respondents were recruited from a pool of people who were willing to be contacted for surveys. The remainder were reached via random telephone dialing. The inclusion of this smaller group allowed the research team to compare the two samples and consider the extent to which the findings could be generalized to a broader population.

As expected, injury outcomes were lowest for respondents who experienced no hazards and had access to adequate protection (i.e. the “least vulnerable” group). Injury rates were higher across the board among workers who reported hazard exposure or weak protection in any of the three areas of vulnerability (i.e. inadequate policies and procedures, awareness or empowerment).

For those reporting both hazard exposure and inadequate protection (i.e. the “vulnerable” group), the effect on injury outcomes was even greater. “One important finding from this study is the combination of hazard exposures and poor OHS protections is particularly detrimental to injury risk,” says Dr. Peter Smith, lead investigator of the project.

This elevated risk is greater than what you would expect based on the risks associated with inadequate protections alone. This suggests gains can be made by focusing on improving protections, in addition to controlling hazards. But the greatest gains, from a public health perspective, are found when you focus on both.

This finding might reflect the psychological stress associated with being vulnerable, says Smith. If workers are exposed to hazards and do not have workplace policies and procedures to protect them, or do not feel that they can speak up about conditions, they may not only end up being physically injured, but also psychologically injured because of the prolonged stress. 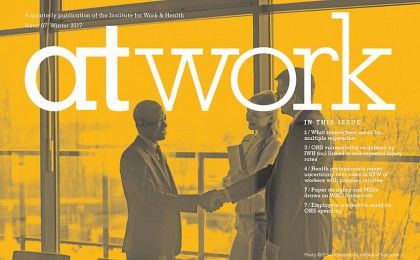