Young people who have potentially disabling chronic health conditions need the same types of workplace supports as older people with these conditions. But due to their age and their status in the workforce, they face distinct barriers to accessing these supports, according to a new study by the Institute for Work & Health (IWH).

The study, led by IWH Associate Scientist Dr. Arif Jetha, probed for similarities and differences in the workplace needs of people with arthritis at different ages and stages of their careers. Published in September 2017 in Disability and Rehabilitation (doi: 10.1080/09638288.2017.1378387), the study found young workers with arthritis faced difficulties in accessing workplace supports for a number of reasons.

On the other hand, workplaces might want to pay special attention to young people and people who are new to their jobs, as they may perceive more barriers to accessing those supports and, therefore, be more susceptible to work disability.

To conduct this study, Jetha and his team recruited 45 individuals who were working or had worked in the previous 12 months. Twenty-five were older than 55 years, and seven were between 18 and 34 years old. The participants had inflammatory arthritis, osteoarthritis or other rheumatic disease diagnoses—conditions that have similar effects on people’s work activity limitations.

The team found people at different ages needed similar types of accommodation and workplace supports for their arthritis. Scheduling flexibility was top of the list. Due to the episodic and unpredictable nature of the condition, participants said they benefited from policies that allowed them to arrive late or leave early, take frequent breaks, work from home, or otherwise modify their schedules as symptoms flared.

Other needed workplace supports were medical and drug benefits, changes to the physical work environment, job modifications, and supportive work environments where employees who have accommodation needs find help and empathy when faced with challenges.

Work supports not a first recourse

Also common across different age groups was a reluctance to turn to workplace accommodation as a first recourse. Instead, participants reported changing and adapting their lives outside work as a strategy to stay in their jobs. Some reported reducing their social roles and cutting out social activities to sleep and preserve their energy for work. Many said they preferred making these adjustments over having to disclose their health needs at work and request support.

However, the study found young people faced an additional barrier when it came to the issue of disclosure: lack of public awareness. Some young study participants said they were often met with disbelief. As one young study participant described it: I think there’s always the misconception that people don’t get impairments until later in life, and so [having an impairment when you’re young] can always be something very difficult either to convey to your employer or to your colleagues [who think] maybe you’re getting special treatment or you’re just a big complainer.

Job tenure and work status also played a role. The short-term, entry-level jobs in which many young participants worked were characterized as offering few resources and little support. While few young participants had worked in their jobs for more than two years, those who had done so reported more support and greater access to workplace resources that helped them sustain their employment.

Likewise, the middle-aged and older workers who had longer tenures said the time spent at their workplaces gave them an opportunity to build supportive relationships with supervisors and peers. Those who had worked less time at an organization tended to describe a less supportive workplace. We sometimes don’t think about challenges faced by young people who live with potentially disabling chronic health conditions, and often lack the knowledge to support them as they enter the labour market, says Jetha.

An important first step may be to strengthen communication practices between supervisors and young workers to enable a dialogue on employment needs and the identification of relevant support strategies. 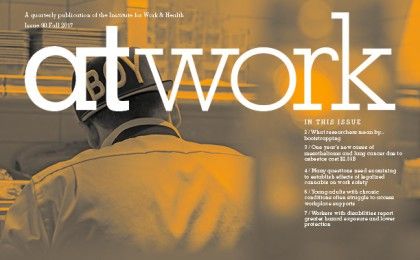